On this second episode of Strings and Things, the eclectic guitarist and singer/songwriter Ann Klein re-strings her Telecaster, while our host Patrick Grant works on his surf green Jaguar. 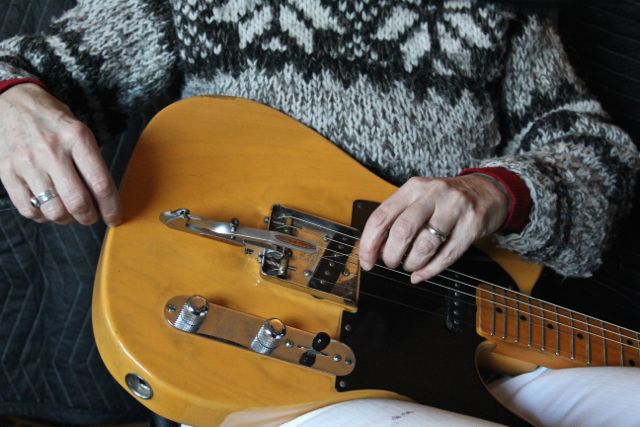 As the old guitar strings get replaced, Ann runs down the pros and cons of performing for live theatre, and describes a couple of hairy moments onstage. We’ll hear about her dog’s hidden talents, and then plug in the Vox amps for a live rendition of her song “Chocolate Pie”.

Ann plays guitar, mandolin, dobro and lap steel. As a composer/songwriter, she’s toured in Europe and the US and composed music for documentary films, non-profit organizations, and television shows. As a guitarist, she’s worked with artists such as Ani DiFranco, Kate Pierson (of the B-52s), Joan Osborne, PM Dawn, Jon King (of the Gang of Four), the American Composers Orchestra, and many others. Ann was the lead guitarist for an all female band sent to Saudi Arabia as cultural diplomats by the U.S. State Department in 2013. She has performed on Broadway in Grease, 9 to 5, Everyday Rapture, Baby It’s You, and Kinky Boots.

Ann’s latest release is Tumbleweed Symphony. To find out more about her and hear tracks from all her albums, visit her webpage at annkleinmusic.com.