Back in your school daze, the science club and the orchestra kids might have worked opposite ends of the school hallway. But we met someone who belonged to both cliques as a kid, and grew up to have careers in both disciplines.

Mark Branch is an aerospace engineer at NASA’s Goddard Space Flight Center in Maryland. He showed us around the facilities he supervises in the electromagnetic test section, where he prepares instruments and satellites for launch into outer space. 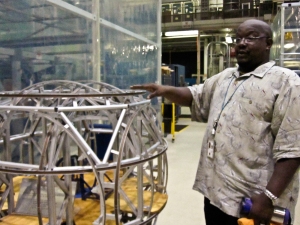 But as DJ Scientific, Mark is also one of the most sought after nightclub DJ’s on the DC circuit, and he’s moving into producing hip hop music in his own studio.

I produced a quick profile of Mark for PRI’s Studio 360, the arts and culture show on public radio.

Now you know, we are great admirers of our friend Elan Vytal, who also goes by the name of DJ Scientific. I’m not sure who started using the handle first, but wouldn’t it be great if we could get these two to make some noise in the same room?

As cool and desirable a device as the iPad is, THIS whole business here…

…is cute if you want to entertain your friends on beer night. It’s hilarious when compared to something like THIS, for instance:

BUT, watching a “brand storyteller” stab at a touch screen in front of a bemused bar crowd on cable TV, is NOT as thrilling or aspirational as a REAL turntable artist combining software technology and fierce deck technique in front of a happy, bouncing crowd. So much hard-sell yapping (buy TWO iPads and YOU can be a DJ!) and not much demo.

We wish the app makers had gone straight to some established beat jugglers and musicians to show off the iPad’s potential as a musical tool, instead of concocting this viral campaign. It would have said a lot more about their products.

As one online commenter said, this was meant to be a “WOW” but turned into a “LOL” instead.

This time on the MMiXdown, Elan Vytal aka DJ Scientific takes some time out to tell us about TTM (Turntablist Transcription Method), a system of notating and arranging DJ sampling, scratching and effects. But instead of notes on a staff, the marks show samples, where to backspin or when your mix fader needs to come up or down in a particular measure.

Elan has been using TTM in his collaborative work with live musicians, especially string quartets, and documents his compositions with TTM. As he describes it, TTM has helped him share his technique with musicians looking  to expand the sonic vocabulary of their instruments, by showing them how to mimic the DJ’s physical moves and rhythms in their own playing. He also finds it useful when teaching a younger generation to use turntables for the first time.

Developed in 2006, TTM was founded by film-maker John Carluccio in collaboration with a wide community of renowned DJs and turntablists, including Rob Swift, Qbert, Babu and Apollo; industrial designer Ethan Boden; and DJ Raedawn, who had been independently developing a transcription method for complex scratching and combined his efforts with John and Ethan. In the late nineties, John Carluccio created the documentary, Battlesounds, which documented the rise of the hip-hop scratch DJ, and the grassroots community of turnablists working to develop the art form.

On TTM’s web-page you can find tutorials, audio demos, sample notations and tips from renowned turntablists, opening up DJ technique to other disciplines and applications. As Elan says, these sounds won’t be limited to just dance clubs and party circuits. “Hopefully future DJ’s can take what I’m doing to the next level and beyond.” 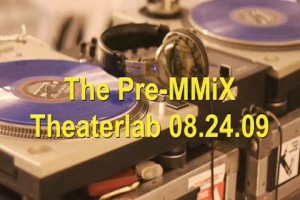 Here’s a look at the Pre-MMiX benefit performances from last Monday, August 24th: a montage of Patrick Grant playing a live-looping installment from his Tertian Circles series on analog synth and electric guitar, Kathleen Supove plays Lay Bare the Heart by Charles Coleman and The Body of Your Dreams by Jacob TV (the latter using a backing track created from an infomercial for the AB Sonic® Electronic Massage Belt), and LB (aka Pound), DJ Scientific (Elan Vytal) and String Theory (Matt Szemela) propelling us through a real time mash up of hip-hop, house and 80s synth pop.

All in all, a great kick-off for our preparations leading up to The MMiX Festival of Interactive Music Technology on Oct. 8-11 at Theaterlab.

Thanks to all who came around and jammed with us on a hot August night. Hope to see everyone in October!

The sun beats down on a Brooklyn street and the neighbors are outside chatting or watering the plants. But inside DJ Scientific‘s secret lair, the beats are flowing, the strings are popping and the DJ’s cat is just confused by it all. I’ve just walked a few blocks from the G train to spend some time with composer/turntablist, Elan Vytal.

DJ Scientific is Elan Vytal, who mixes his unique beat juggling and scratching with classical and world musicians. His is a lush, but gritty, hybrid urban sound. Rocking nightclubs from Oakland, CA to New York City, performing live in opera houses and concert halls around the world, Elan’s numerous collaborations have taken him far beyond the standard notions of a DJ. One could say he’s a virtuoso on the decks, always striving to develop his “instrument.”

You may have heard of Elan through his work with composer/violinist DBR, Daniel Bernard Roumain. Elan is a member of DBR’s nine-piece ensemble, DBR & THE MISSION. From Elan’s bio: “The duo began collaborating extensively, creating and premiering a series of new works, including Call Them All, a laptop concerto written by DBR with sound design by Elan Vytal, commissioned by American Composers Orchestra, which premiered at Carnegie’s Zankel Hall in 2006, and Sonata for Violin and Turntables, an hour-long touring program co-produced by Elan Vytal and DBR…”

Hanging with Elan Vytal at his Brooklyn apartment, he told me about how he made the switch from rapper/MC to DJ, how he’s developed his career, and about his interactive relationship with live musicians using turntables, Serato Scratch Live and Ableton. You can listen to his comments and bits of his music here:

As a special treat, Elan invited six string violinist Matt Szemela (also known as String Theory) to jam on a couple of songs they’re writing as the group LB (Pound). So here, they did a demo of their set-up and performed two pieces for our home video cameras: