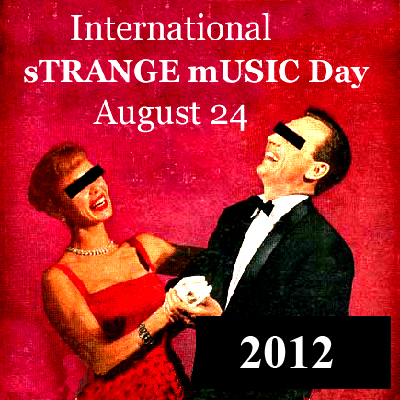 Guitarist Angela Babin was a founding mother of the band the Ordinaires who received critical acclaim in the 80’s in the downtown NY music scene.  She met Cristian Amigo (Guggenheim fellow, guitarist and songwriter) while playing E#’s Syndakit. During an extended wait for the subway they formed their collaboration for the Gotham Roots Orchestra via a mutual appreciation for the blues. They will be performing  some of their work – strangely – and with strange stringed instruments. This particular performance will be dedicated to Pussy Riot and all other music activists.

Taking elements of folk, nu-metal, and crunk, and then ignoring them completely, the music of Da Groove Commanders defies meaning. Three of their members – Captain Jesse Krakow, Sergeant Dylan Sparrow, and Lieutenant Tom Shad – will be providing a demonstration as to when and how to get “lost in the groove” by pinpointing specific moments of total groove-i-osity found in popular music and updating them with an edgy sound that appeals to the contemporary urban youth market. Grade = Crucial.

Arts Houston described her vision as “captivating and true,” composer/pianist Eleonor Sandresky‘s music has been performed on three continents. She has been a composer in residence at STEIM and The MacDowell Colony, among others. Her music is available on Koch International, One Soul Records, ERM Media, and Albany Record labels. Eleonor is at the same time one of New York’s preeminent new music pianists, performing concerts throughout the world with performances of new works by composers from Egberto Gismonte to Philip Glass, with whom she has worked since 1991. The depth of her experience as a performer informs her work as a composer in a very deep way, and she mines that experience for the hybrid work that she has been creating, blending movement, the acoustic and the electronic into one unique art form.

Glenn Cornett will present a piece for electronics, etc. based in part on contours extracted from paintings of an emerging, Brooklyn-based artist.  Expect some gamelan samples, and in deference to Strange Music organizer Patrick Grant, some live guitar work.  Glenn will probably be making use of a 1,920-element light installation he has designed, built and programmed for use with music performances.

I’m playing two compositions of mine: the 32 Beethoven Sonatas in One Minute, and “A Dance Class In Queens” from my piano theater piece “The Gold Standard,” with text by Ed Scmidt. – Jed Distler

Johnny Reinhard’s DUNE for solo bassoon was first performed on the Seattle Spring Festival in 1990.  The piece was the catalyst for the Raven CD, produced by Michael Thorne (Stereo Society). Its design showcases the fantastic realms of musical expression possible with the contemporary instrument.  As one might travel through different worlds in a Frank Herbert science fiction novel (such as Dune), the performer takes the listener through exotic soundscapes. Another appealing metaphor is the equation of the bassoon with the sands, both shaped by wind. The piece begins with resonance juggling, proceeds to microtonal melody, glissandi, key percussion, diverse equal temperaments, and enters into musical territories rarely, if every, visited.

My set will consist of improvised performances of graphic scores created by YOU, the audience. Beforehand, there will be paper, pencils, and crayons, so you can make a score and submit it. Or use your own materials! From the submissions, I’ll choose a few. I will have a few moments to think about it, but it’s at least 85% spontaneous! – Kathleen Supove

Miguel Frasconi uses laptop, controllers, electronics, and an instrumentarium of glass objects to create music from a uniquely imagined tradition. His glass instruments are struck, blown, stroked, smashed and otherwise coaxed into vibration. His electronics and controllers push and pull on the fabric of found and invented sounds. Tonight, he will present SUMPSIMUS, an exploration of correctness and beliefs in relation to our daily sonic experiences and how we are present and (re)present ourselves in the world.

Patrick Grant is a serious musician who is often mistaken for the opposite. Tonight he will most likely prove his detractors correct. His music is informed by his experience and work with contemporary-classical and popular music (John Cage, Philip Glass, Quincy Jones, Kid Creole), the communal music of the Balinese Gamelan, and recently with his incipient work in the Guitar Circles of Robert Fripp. He has written scores for theatrical visionaries Robert Wilson (of Einstein on the Beach), The Living Theatre, and companies in Brazil and Europe. He is a recent recipient of Con Edisons Exploring the Metropolis Composer Residency for the creation of a new work for large guitar ensemble, Circle-Lines.

As rahrahree!, Tamara Yadao and Kurt Gottschalk create mid-air palindromes with guitars and speaking voices. Theirs is a geometry of oratory where words and meaning are of slippery significances only as important as the listener wants them to be.  Yadao and Gottschalk also co-curate the ongoing txt fst performance series which has presented performance of text-based works at Proteus Gowanus, Flushnik and on X>Triangulation>X online radio. Yadao also plays 8 bit music as Corset Lore and in the groups Frogwell, foci + loci and tū. Gottschalk plays in the duo Ecstasy Mule and hosts the Miniature Minotaurs program on WFMU.

Entertainer and “vocal cartoonist” Zero Boy is an East Village icon who recently appeared Off-Broadway in the Yllana Production of 666 at the Minetta Lane Theater Zero Boy performed regularly on NPR’s The Next Big Thing and has been seen on the television shows Fox and Friends and Good Day New York and MTV’s M2 network.
He will be seen soon as Dr. Drago In Nickelodeon’s Mission Dawn. He has written, directed and performed numerous productions on both coasts and Europe.

August 24th is International Strange Music Day. It’s a real holiday, yes it is. To celebrate, some of NYC’s best and brightest composers and performers are getting together to have a very unserious night of music making. This as an opportunity to for them to share unusual sounds, unusual instrumentation, and unusual compositions rarely heard or new ones that will never be heard from again.

Conceived by composer/performer Patrick Grant, the evening will be held together by vocal sound FX master Zero Boy (Joel Blumsack). Highlights include an audience participatory graphic score creation and performance by Kathleen Supove, the choreographic piano of Eleonor Sandresky, the microtonal bassoon of Johnny Reinhard, the musical magic of Miguel Frasconi, the playing of odd instruments by Angela Babin & Cristian Amigo, the reunion of the duo Jolly Ramey who will create new songs from that morning’s tabloids, a DJ remix of composer John Cage by Gene Pritsker, the humorous songs of Jed Distler, a masterful deconstruction of the pop catalog by Jesse Krakow, recombinant music and text by Kurt Gottschalk & Tamara Yadao, and a very special performance by Spectrum founder Glenn Cornett.

Needless to say, other musical surprises are planned.