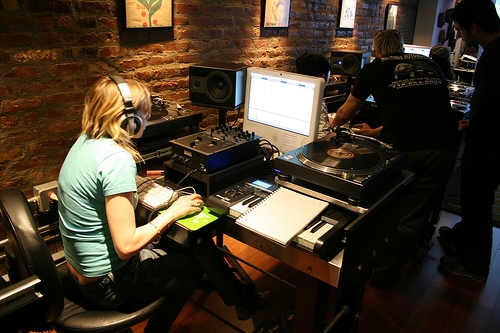 Sitting on the couch, sandwiched between a class going over the finer points of filtering a buzzy bass, and a giant mixing console with lots of controllers, we were investigated by one large curious dog and one small energetic dog. I wondered if these pups could rock the decks too, but who knows. Maybe they’re DubSpot admissions officers.

Dan Giove founded DubSpot as a place where musical novices, experts and everyone in between could get a solid grounding in music production, as well as training in the latest software and hardware tools for creating music. At their studios in the Meatpacking district, they offer DJ tutorials, lessons on mixing and mastering, sound synthesis and workshops with Ableton, Reason, Logic and others. Students can attend intense weekend training sessions and there’s even a youth program. Start ’em young, I say, start ’em young.

Why there’s even DubSpot Cafe downstairs, where Ableton instructor and upcoming MMiX Festival performer, Jon Margulies did a set during this year’s Make Music Fest back in June:

Perhaps the most important part of DubSpot’s mission seems to be community, a community of beginners and experienced artists, producers and DJ’s that’s much much larger than the studio space DubSpot is quickly outgrowing. The vibe we got is that everyone is cool at DubSpot, everyone’s musical point of view is valid and supported, and everyone can work together to push music technology in ever more creative directions.

Members of Dubspot have spent the summer on the DubSpot LIVE 8 U.S. Sessions Tour, and these guys are so money, they’ve put together video recapping some of what went down. This is one of those clips:

We’re so pleased the folks at DubSpot will be doing LIVE 8 workshops at the MMiX Festival this October. In the meantime, dust off that old Rakim 12-inch & get thee to DJ school!