A conversation with Thomas Deneuville, editor and publisher of I Care If you Listen, a magazine and blog about new classical music, art and technology; and Daniel Genser, co-founder of TypeEngine, a new platform for publishing your own magazine on Apple’s NewsStand. Thomas and Daniel discuss how they turned ICIYL into a multimedia magazine app that you can download to your iPad or iPhone.

This segment originally appeared on the August 29, 2013 episode of Pop Tech Jam, the independent audio magazine devoted to mashing up pop culture, technology and more! The podcast is hosted by J.D Biersdorfer and Pedro Rafael Rosado.

This time on BACKTRACKS, the thought of a grade-schooler rocking out to a bluegrass record is not quite the image of youthful rebellion we’ve become accustomed to.  For J.D. Biersdorfer, author, tech guru and co-host of the online radio show Pop Tech Jam, digging around in her parents’ record stacks took her on an unexpected journey through the music of the Appalachians.

Listen to her story here: 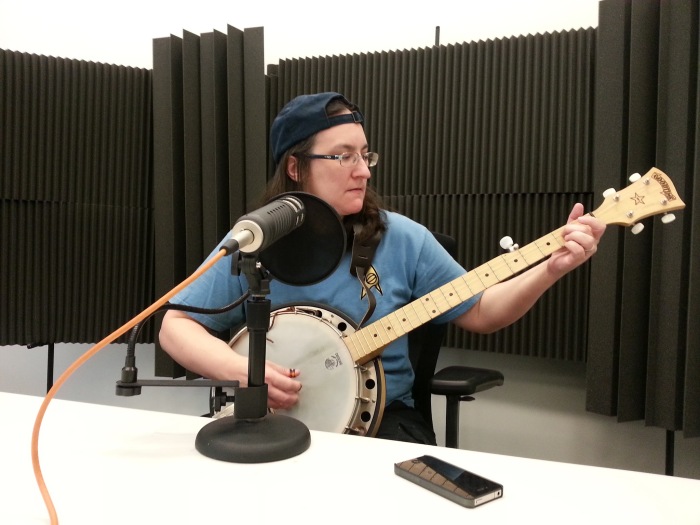 As J.D. tells it, the record which so captivated her was a collection of field recordings made by ethno-musicologist Diane Hamilton (daughter of the millionaire Harry Frank Guggenheim) during a trip to Virginia and North Carolina in 1956. The recordings were gathered into a 20-song collection called “Instrumental Music of the Southern Appalachians”.

Of the first song appearing on that album, a rendition of “Cripple Creek” by virtuoso banjoist and fiddler, Hobart Smith, J.D. says:

The history of the song is clouded as is the history of most of the Appalachian stuff. Cripple Creek I think is a place; I think it’s old country language for a crooked stream. There is a Cripple Creek in Virginia, there’s also one in Colorado and so there’s been this fight over which Cripple Creek the song is about. It’s got alternating lyrics, people make up their own words and they’re very tied to a certain region.

I forget the lyrics because they are so variable, but it’s basically, you’re going up to Cripple Creek and there’s a girl involved. In one version you roll up your pants and wade into Cripple Creek. If we go with the Appalachian background of it, a lot of those songs are very sad. In fact, my banjo teacher says the core of most Appalachian ballads is: you come home, everyone you know and love is dead; you come home and you make sure that everyone you know and love is dead; or you come home dead. “Cripple Creek” could fit in with that because with some of the versions that I’ve heard, something bad happens with the girl.

Steve Martin wrote this pretty famous essay to the banjo community about his history with the instrument and he has a whole paragraph about “Cripple Creek” – I play it all the time, you can play it slow, you can play it fast. Tony Trischka tells the story of Steve Martin’s essay when he’s on stage. Buffy Saint Marie does a version of it with a mouth bow, I think it was on Sesame Street. So it’s out there, even Etta Baker, the Piedmont guitarist who passed away not too long ago, had a nice slow rendition of it, and people didn’t know she played the banjo but she did.

So, with thanks to J.D. for picking away at the tune for us, and in honor of banjo legend Earl Scruggs, who passed away last year, we’ll leave off with Flatt and Scruggs’ version of the classic “Cripple Creek”.

Last week, Dan Trueman, co-founder of the Princeton Laptop Orchestra (PLOrk), stopped by the NY Times to do a guest segment for the paper’s popular NYT Tech Talk podcast.

During his interview with co-host J.D. Biersdorfer, Dan talked about the differences between a traditional orchestra and a laptop orchestra (surprise: they sound nothing alike!), and he also demonstrated one of the first instruments created for PLOrk, “The Droner”. He described the special speakers they use to fill a room with sound and how the orchestra’s members manipulate audio using the computer’s own sensors.

Dan’s segment appears about 6:30 into the program, right after this week’s technology news:

You may have seen The Princeton Laptop Orchestra profiled on Fox News, but you won’t want to miss Dan Trueman and a chamber-sized, crack team of PLOrkers perform some of their work at the MMiX Festival on October 9th. Perhaps they’ll turn off all the lights and let the music be made by the laptops’ cameras tracking mini-flashlights? Maybe there’ll be a bit of Norwegian fiddle thrown in for some ancient analog ambience?

Probably a little bit of both.