Made possible in part by the New Your State Council on the Arts, The Lower Manhattan Cultural Council, Make Music NY, KORG USA/Vox Amplification, the NYU Tisch Adjunct Development Fund, and ASCAP. 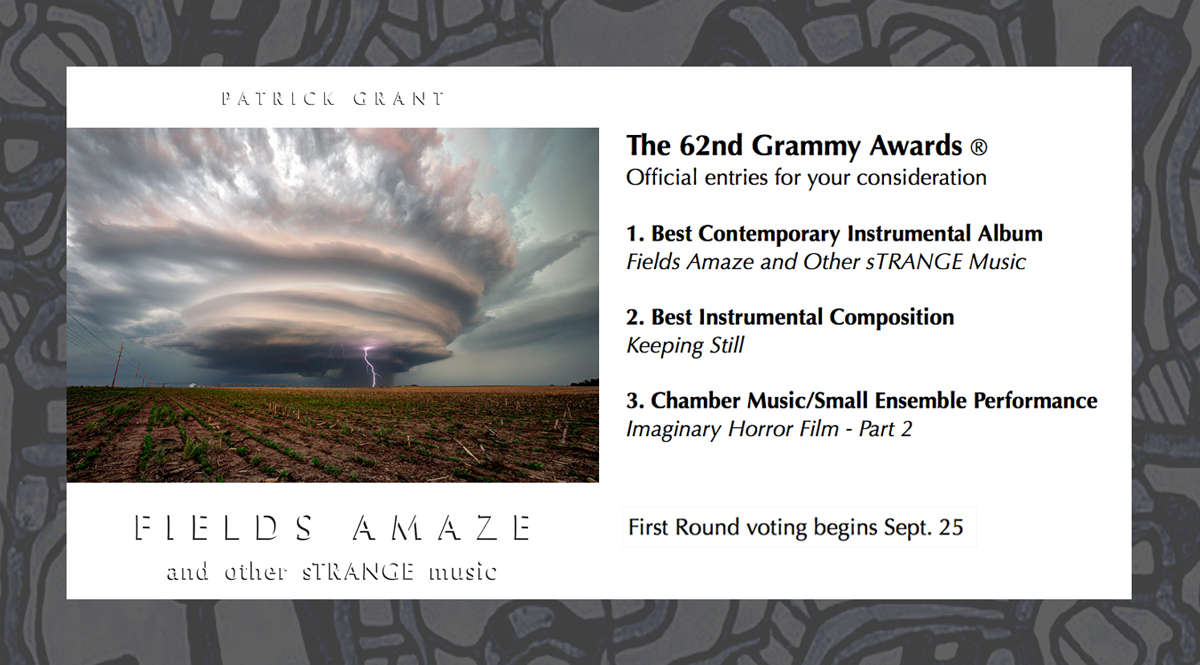 FIELDS AMAZE & Other sTRANGE Music Gets Three Entries in the 62nd Grammy Awards®!

Official entries for your consideration…

Fields Amaze and Other sTRANGE Music

Thank you everybody who have so far supported our upcoming 27th Annual Concert of Colorsperformances at the Michigan Science Center and the Detroit Institute of Arts. We just crossed the 50% mark toward our goal of $4500. Your tax-deductible support goes toward our dozen and a half musicians for their time and talent, the cost of our rehersal space, cartage, ads, and other essentials that enables us to bring our performances free of cost to the public.

The festival itself and our partner museums provide excellent opportunities for the group to offer transformative experiences that are free of charge to the Detroit community. Still, Tilted Axes is entirely self-funded and relies on your generous support to pay for its musicians, rehearsal space, and other administrative costs. Please consider joining our team and contribute to Detroit’s musical history!

This month will see the completion of a particular project that has long been a dream of mine: music for live ensemble in a planetarium. The idea is to engage the public in science through music and art. Thanks to the 27th Annual Concert of Colors, the Michigan Science Center, and the Detroit Institute of Arts, I’ve had the opportunity to develop new music for Tilted Axes: Music for Mobile Electric Guitars that commemorates the 50th anniversary of Apollo 11’s lunar landing in a work titled, “MOONWALK.” My aim is to take this newly developed piece and similar work to other planetariums across the country in the months and years to come.

By becoming a co-producer of our event, you are eligible for all kinds of awards like CDs, T-Shirts, etc.

Meet the performers and producers of Tilted Axes Detroit: Concert of Colors HERE

With the project is in its ninth year, its surprising to hear when some people find it unclear what Tilted Axes is or is not. Here’s a short list of 10 things that was created to point people in the right direction. Pardon the third person…

2. Tilted Axes is a procession of electric guitarists who wear mini-amps.

3. Tilted Axes can perform anywhere there are people, excelling in untraditional venues.

4. Tilted Axes’ roster of musicians can change from performance to performance, city to city.

5. Tilted Axes’ musicians learn a common repertoire created by PG and rehearse it in workshops.

6. Tilted Axes performances are free to the public and are supported through institutional and/or private donations.

9. Tilted Axes is an apolitical organization, but it does support science, arts programs, and renewable energy whenever possible.

10. Tilted Axes works best when it is part of something bigger than itself i.e. festivals, exhibitions, community initiatives, astronomical events.

Every little will help create a new musical work that will resonate for a long time.

Thank you all for your time and consideration,
Patrick Grant & Tilted Axes: Music for Mobile Electric Guitars 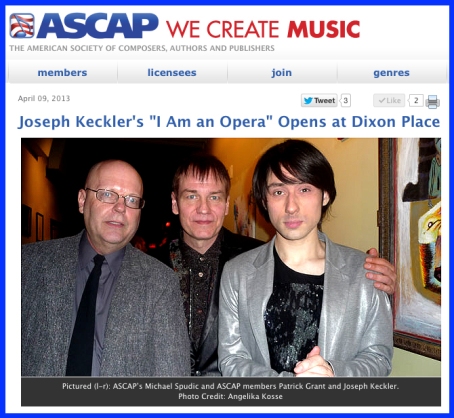 A highly subjective musical take on what it means not only to write an opera, but to encompass and even embody one in the modern age of internet witnessed its world premiere launching on April 5th at Dixon Place, New York City’s “Laboratory for Performance.” Written, composed and performed by ASCAP member Joseph Keckler, this conceptual tour-de-force also provided a vehicle for fellow ASCAP member Patrick Grant, collaborating as music producer, with violin arrangements added to the artistic mix by Dan Bartfield. Directed by Uwe Mengel, this highly operatic exposure of Keckler’s inner subconscious, transparent at its most ridiculous and sublime, is propelled through a multi-media series of phantasmagoric tableaux with many an unexpected turn. “I Am an Opera” steadily escalates with its unspoken pronouncement that life, especially at its most primal and personal, is supreme artistic game. Performances will take place on Friday and Saturday evenings throughout the month of April.

The Most Eclectic Contemporary Music Festival of the Season
Transversing genres, locales and aesthetic modes throughout NYC and beyond

Click here for a PDF version of the press release:
http://tinyurl.com/78nsqaz

With a 28-year history of leading-edge concert production in NYC, Composers Concordance presents The Composers Concordance Festival 2012. This will be a whirlwind of five innovative contemporary music concerts in ten days, including over 40 of NYC’s most distinctive and accomplished composers. This festival spotlights the composer in different contexts, engaging the audience and performer in the creative process, and contending with the dizzying multiplicity of styles within today’s music scene. All the while, Composers Concordance puts a premium on distinguishability, that factor by which we remember and denote individual identity – and it’s that aspect, the distinction and breadth of the composer’s message, on which we’ll chiefly focus.

The first concert, ‘Songs‘, shows the various vocal styles the composer writes songs for. From the traditional western classical soprano and baritone, to the modern pop/r&b diva, to voices of other world cultures that stretch the boundaries of notation and pitch.

‘The Composers Play Composers Marathon‘ shows the composer as a performer of his or her own music. A common practice in baroque, classical and romantic periods but rarer in the mid 20th century. Toward the end of the century and into the new 21st century, the art of the composer-as-performer is re-emerging, and on this marathon we hear no fewer than 27 composers interpreting their own works.

‘New Blues‘ asks the composer to show his or her compositional skill and voice in this very particular genre that influenced so much of the music in the 20th century. With the 100-year anniversary of the first publication of a blues piece by W.C. Handy, we look at how the 21st century composer is influenced by this style.

The development of technology was quick in the 20th century, and it inspired composers to create brand new timbres and sonorities with the possibilities electronic manipulation of sound provided. We see what the 21st century composer has to offer to progress further the art of computers, amplifiers, and circuits in the ‘Electronics‘ concert of the festival.

With the final concert: ‘Ensemble‘, we witness the composer in an ensemble setting, performing each others’ music. The ensemble in question is the Composers Concordance Ensemble (which is the ensemble-in-residence at William Paterson University), made up of the directors of comp cord as well as regular performers and composers associated with the group.

NOTE: There will be a press conference before the first performance on January 27th, at 5:30pm at The Turtle Bay Music School. Members of the press are invited to attend and learn more about the festival. RSVP: composersconcordancerecords@gmail.com

I. SONGS
Composers Celebrate the Diversity of Song
Part of the Turtle Bay Visiting Artist Series