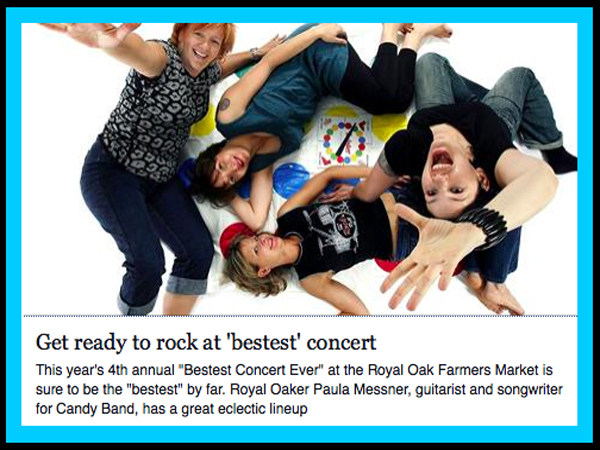 Get Ready to Rock at ‘Bestest’ Concert
The Observer & Eccentric Newspapers
by Diana Wing, Guest Columnist

This year’s fourth annual “Bestest Concert Ever” at the Royal Oak Farmers Market is sure to be the “bestest” by far. Royal Oaker Paula Messner, guitarist and songwriter for Candy Band, has a great eclectic lineup of live music, plus kids’ activities, and food and beverages for this family-friendly event that runs, 5-8 p.m. Saturday, March 21.
“It’s going to be so fun this year,” she said.

Rockin’ the Red Carpet photos, a Crazy Hair Salon, Zany Face Painting and a haute couture dress-up station will get the fun started. Kids can make a wax replica of their hand with Creative Arts Studio, try out a range of instruments at the McCourts Musical Petting Zoo, go gem mining with the Miners Den, and play games with the Royal Oak High School Drama Club and the Band Boosters.

Messner has planned an eclectic lineup of performances for the night. Of course, the Candy Band moms will be playing children’s favorites, along with original songs. Their music is a blast for adults, too. The intensity will grow with Horse Cave Trio, known for their high energy roots rock, also characterized as high-octane roadhouse blues or outlaw country rock ‘n roll. Motor Honey is a five-piece band fronted by Sara Covatta whom Messner describes as having a “beautiful voice.” The group performs a mix of rock, soul and funky grooves – American Soul.

Messner also invited Evenin’ Gentlemen who have a collective 100-plus years as active members of the International Barber Shop Harmony Society. They currently sing with the Detroit Oakland Gentlemen songsters and provide “wholesome and pleasing entertainment across a range of genres in the barbershop style.”

No doubt the headliner for this year’s “Bestest Concert Ever” will be Tilted Axes: Music for Mobile Electric Guitars. Founded in 2011 by composer/performer and Detroit native Patrick Grant, Tilted Axes is an electric guitar procession of upwards of 30 performers who wear portable amps strapped on their sides or backs. It has the energy of rock and it’s part street theater as guitarists walk through the downtown New York City art scene and other communities.

“We have a bit of a guerrilla esthetic,” said Grant in a highly entertaining promotional video. “We’re able to go where the public is. That is the beauty of being mobile.”

Messner invited Grant to perform at the “Bestest Concert Ever” because she had taken part in a Tilted Axes procession last summer in Detroit.

“We started outside the Detroit Historical Museum and we did a song. We marched up Woodward. We went outside of the library and the DIA and around the Wayne State campus,” she described. “We went into a restaurant where people were having lunch and drinking a beer … and we just filled the place. We all stood there and played a song and everybody (at the restaurant) their jaw hit the floor, and then we left. They never knew what hit them!”

One bass player and a snare drum player usually perform with the group. Grant writes the original music for guitar. There are four-six parts, so not everyone plays the same thing.

“One guitar might be playing chords, one might be playing notes. They all go together,” Messner said. “There are certain songs where I break out in a lead and it will be my solo, and I can do whatever I want and everybody backs me up. Then somebody else will come out and do a solo.

“Some of the songs are complex and everybody’s got notes taped to their guitar and clipped on, so it’s a little crazy. But it’s a lot of fun and I was really glad to be a part of it last year.”

Messner expects about 15 performers in the Tilted Axes Detroit crew will play at the “Bestest Concert Ever.” She and fellow guitarists will rehearse the week before when Grant come into town. If the weather is permitting the mobile electric guitarists might wander around downtown Royal Oak the night before the concert, Messner said. Spring, and possibly an equinox procession, is just around the corner.

Admission to the “Bestest Concert Ever” is only $5 (children 3 and younger are free), with 100 percent of profits going to the Royal Oak Optimist Club which organizes and helps to support numerous youth activities. The Royal Oak Farmers Market is located at 316 E. 11 Mile. Call 248-246-3276. Visit http://www.tiltedaxes.com/tiltedaxes.html to watch a video of Titled Axes in action.